The amatriciana pasta is one of the many classic Italian pasta dishes. Like Italian cuisine in general, it is simple, made from a few quality ingredients, and definitely delicious.

As Italian cuisine relies heavily on simplicity, all the ingredients of any traditional dish tend to be more or less essential to the success of that dish. Meat products, for example, are often used to bring texture and taste to the rest of the dish. Only small amounts are used to spice up the dish, and that is their entire purpose. That is why it is difficult to find products to replace meat in dishes like spaghetti all’Amatriciana or alla Carbonara. With this recipe, however, you can make a delicious vegetarian amatriciana version using vegan tofu bacon. While maybe not exactly like the original, it’s tasty and worth it for being completely meatless!

The recipe to make tofu vegan bacon can be found here. We used marinated tofu and it will make your job much easier. Unfortunately, marinated tofu is not so widespread, so in case you can’t find it in your country, you will need to use liquid smoke.

The history of the original amatriciana pasta

Amatriciana pasta is made with the amatriciana sauce, also called matriciana in the dialect of Rome. The original ingredients are pork cheek (guanciale), tomato sauce, pecorino romano cheese, chili, and white wine. In Italy, many people usually replace pork cheek with bacon (btw, most chefs wouldn’t approve of this change).

This pasta dish comes from Amatriciana, a small town in the province of Rieti, in Lazio. History has it that the dish became popular after the First World War, and particularly after the recipe appeared in a book by Ada Boni, published in 1927. We cannot exclude that the recipe already existed before but there are not many references to the amatriciana pasta before the publication of the book.

The ingredients for the amatriciana pasta dish are, as mentioned above, very simple: spaghetti, tomato sauce, pork cheek, pecorino cheese, chili, and some white wine. In this recipe, we replaced the pork cheese with tofu vegan bacon in order to make the dish vegetarian. The vegan bacon might taste slightly stronger than bacon, so we highly recommend you adjust the amount of soy sauce at your preference when making the bacon. All the rest of the steps are the same as in the traditional amatriciana pasta.

Spaghetti is considered to be the best (and almost only) type of pasta to use with the amatriciana sauce!

To make the dish fully vegan, you will just need to replace the pecorino cheese with a vegan cheese that resembles the taste of pecorino. Nothing more is required.

If you liked this recipe, please follow us on our social networks: The amatriciana pasta is one of the many classic Italian pasta dishes. This recipe is fully vegtetarian and can be made vegan in no time.
4.85 from 13 votes
Print Recipe Pin Recipe Share on Facebook
Prep Time 10 mins
Cook Time 15 mins
Total Time 25 mins
Course Main Course
Cuisine Italian
Servings 4 people
Calories 465 kcal 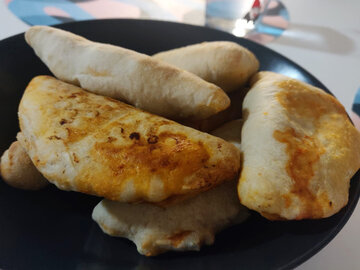